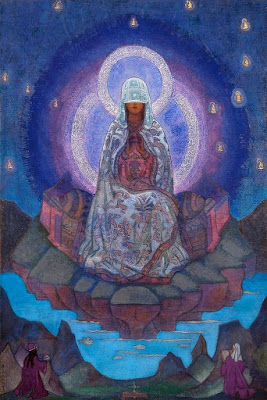 The Septenary Cosmology of Tayyibi and Blavatskyan Gnosis
June 18, 2017 by harvardtheosophicalsociety
One of the groups that she lived with, the Druze of Lebanon, were an off-shoot of Syrian Isma’ili. Though the evidence is little more than conjecture, the similarities of cosmologies between the Isma’ili and Theosophy are tantalizing. https://harvardtheosophicalsociety.wordpress.com/2017/06/18/the-septenary-cosmology-of-tayyibi-and-blavatskyan-gnosis/

Alternative Scriptures: Melville’s "Lost Gnostic Poem"
June 19, 2017 by Philip Jenkins
Another author who was very widely read in these years was Helena Blavatsky, co-founder (in 1875) of the Theosophical movement. In her Isis Unveiled (1877), she wrote that "The votaries of the ancient worship were persecuted and put to death on charges of witchcraft. The Albigenses, descendants of the Gnostics, and the Waldenses, precursors of the Protestants, were hunted and massacred under like accusations."
http://www.patheos.com/blogs/anxiousbench/2017/06/fragments-lost-gnostic-poem/
Alternative Scriptures: Theosophy and the Esoteric Tradition
June 23, 2017 By Philip Jenkins
In presenting her picture, Blavatsky drew on the scholarship on Gnostic and early Christian heresy available in her own day, and Isis Unveiled borrows extensively from King’s The Gnostics and Their Remains (1864). Following the Gnostics of old with remarkable fidelity, Blavatsky and her contemporaries interpreted Christ’s death and resurrection as a symbolic and psychological reality, that reflected transformations within the soul of the believer.
http://www.patheos.com/blogs/anxiousbench/2017/06/alternative-scriptures-esoteric-world/

The reference to Blavatsky is baffling... (part 5 is better - it recaps what Blavatsky had already stated 140 years earlier - HPN Notes:''The many striking and instructive passages referring to reincarnation from the writings and teachings of the Gnostic Heresiarchs have yet to be collected....An authoritative volume, however, has yet to be written on the subject, supported by the citation of the innumerable passages that are to be found in the writings of the Gnostics, Neo-platonists and early Church Fathers.''(Blavatsky, CW13, p.79)
The Case for Gnosticism, Part 4: What Happens After We Die?
Scott S. Smith- 05/30/2017
Madame Blavatsky, who popularized the Hindu version of reincarnation in the West, came to believe at the end of her life that it happened only rarely due to some special attachment to this world. If she could be so open-minded, then New Age enthusiasts ought to consider other explanations for the phenomena attributed to past lives.
http://www.huffingtonpost.com/entry/the-case-for-christian-gnosticism-part-iv-what-happens_us_592d8afee4b08861ed0ccc11
https://www.huffingtonpost.com/entry/the-case-for-christian-gnosticism-part-v-the-dead_us_596791fee4b07b5e1d96edcb
Nice Italian article, mentions Theosophy influence L’antica disputa tra Cristianesimo e Gnosticismo
Yuri Leveratto -
http://www.mondoraro.org/archives/138907
Deconstructing Gurdjieff on Aeon Byte Gnostic Radio https://thegodabovegod.com/deconstructing-gurdjieff-2/
also check out the fun show on Blavatsky with special astral guest Gary Lachman
https://www.youtube.com/watch?v=Y9WRwf_rMcs
Blavatsky on the Gnostics- Moe -April2 2015
https://gnosticwarrior.com/h-p-blavatsky-on-the-gnostics.html

Blavatsky and the Once and Future Gnosis - Stephen Hoeller July22, 2106
https://www.youtube.com/watch?v=AcNkoQXUbWA
Summary of Blavatsky’s Commentary on the Pistis Sophia: https://theosophyproject.blogspot.ca/2018/02/introduction-to-gnosticism-pistis.html