Blavatsky & The Morning of the Magicans (Pauwels/Bergier) 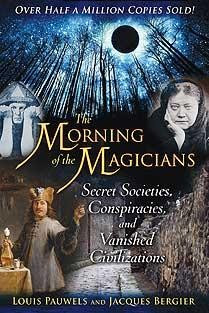 As covered fairly extensively in our May 2018 posts, due probably to the current socio-political realities (i.e. the rise of right-wing nationalistic politics with xenophobic agendas due to refugee problems), there has been a recent upswing in interest in the relation of politics and the occult, including the influence of the theosophical movement on Nazism.

It didn’t take long for people to develop an occult mythology around Nazism. In Lewis Spence’s 1940 Occult Causes of the Present War, you already have the anti-occult, satanistic mythologizing of Nazism , but he opposes it against a Christian worldview instead of a scientific one (the forces of occultism are Satanic and support the Nazis, the forces of Christianity are spiritual and support the Allies). René Guénon’s 1949 Letter to Julius Evola discusses Aleister Crowley’s role as a black magician connected to Nazism, and the Nazi regime was amply mythologized in the popular culture of the wartime period. These ideas coalesced into an opulent conspiracy theory in 1960, spawning something of a cottage industry in books on Nazism and the occult. This outgrowth caught the attention of more academic historians around 1976 and has been something of a cottage industry in that field as well ever since (Goodrich-Clarke, pp. 219-225).

For this post, I thought I would add my own small contribution to this question by looking at the mothership that started it all in 1960, Pauwell and Bergier’s Morning of the Magicians, a rather funky book that became a surprise bestseller in France and then caught on with the English market a few years later just in time for the counter-culture movement.Where to begin in describing this curious work? Basically one could say that, besides spawning the whole occult Nazism mythology, it also spawned the whole Eric Von Daniken – Chariot of the Gods UFO/Ancient Civilization mythology. Moreover, there is also a pre-X-Men-like notion of a future breed of super-powered mutants spawned from experiments in nuclear energy.
Blavatsky and the Theosophical Society get mentioned a few times, and so how is she portrayed in all of this? They basically take the theosophical White Magic/Black Magic concept and turn it around. Blavatsky and the TS are said to have “opened the door to a luciferian East”, ( Pauwels & Bergier, 446) meaning that they are somehow connected to a hidden lodge of black magicians which act as a secret governing power behind Hitler and the  Nazi regime. He relies on Guénon’s 1921 Théosophisme, histoire d’une pseudo-religion to discredit Theosophy, implying that Hitler is an anti-Christ figure, although Guénon gets lumped into the occult Nazi-inspirer camp as well.
Now it seems that Pauwels had a mystic bent, so it looks like a case of a would-be mystic, disgruntled with bad experiences with a Gurdjieff group, wrote this book to settle a score with the occult scene, and set up his own esoteric current. (Lachman, 1). Therefore Blavatsky, René Guénon, Aleister Crowley, the Golden Dawn and Gurdjieff all get shot down at one point (Rudolf Steiner somehow gets spared, perhaps because he was a conspicuous target of Nazi persecution and possibly due to his Christian bent, Pauwels having had a Roman Catholic upbringing).
﻿

Later on, Blavatsky is credited with the notion of primitive gigantic human beings, which they adapt (470-71). The actual language is so evasive and ambiguous that is difficult to tell how they feel about occult philosophy, but basically they’re implying that all esoteric groups more or less partake of black magic, although their occult doctrines of ancient giants and evolutionary processes are partially correct, and the white magicians are represented by modern technological society, with Pauwells and Bergier giving the correct explanations of occult concepts, that is, in a more scientific, rationalist, hence materialist, bent.
Ironically, one can notice the theosophical influence in their approach, with the spiritual aspect being replaced with atomic-age science and UFOs, a kind of materialistic, space-age version of Isis Unveiled, if you will (with a Charles Fort influence as well), or rather volume one of Isis. Volume two of Isis seems to have actually been quite an influence on another milestone of popular esotericism, Baigent, Hunt and Lincoln's 1982 The Holy Blood and the Holy Grail; and so one can see the extent of the Blavatsky influence. Therefore one could posit that this book is very much concerned with appropriations of theosophical concepts while rejecting the esoteric philosophy in favor of materialistic, albeit fantastic explanations. The Ancient Astronaut/UFO genre has even been studied as part of the Theosophical Current; Krueger gives a good overview of the theories of how theosophical speculations morphed into the ancient astronaut current (pp. 56-59). Strangely, this type of material has apparently been considered in communist Russia as excellent anti-theistic, pro-materialism propaganda (Colavito).

Sadly, this demonizing portrayal certainly didn’t help Blavatsky’s beleaguered reputation at the onset of the counter-culture revolution. This book is surely the main source for a lot of strange conspiracy theories concerning Blavatsky that can be found on the internet. Fortunately, more recent academic works on Nazism & the Occult treat Blavatsky with a more cautious, respectful neutrality of sorts (simply positioning her as the formulator of an esoteric racial theory). Lachman has a positive ‘there is no bad publicity’ take on this issue, citing Mircea Eliade, he points out how it inspired counter-culture optimism and how it put Blavatsky’s name out there for a whole new audience (8). I think that the book does serve as a good example of how influential Theosophy has been in popular culture.

How did Blavatsky’s mainstream reputation survive this negative portrayal? Briefly, one can point to a few things. Goodrich-Clarke’s 1985 The Occult Roots of Nazism, succinctly points out the largely spurious nature of the Morning of the Magicians Nazi mythology, although Blavatsky does not fare very well in that book, either (218-221). Lachman (8), May (107) and Kripal (180) have further pointed out the book’s various problems of historical credibility. Rather remarkably, Goodrich-Clarke himself does a dramatic about-face and devotes a positive ground-breaking 2004 study of Blavatsky in his Western Esoteric Masters series, giving her a much needed boost to her reputation. Also, Antoine Faivre in works such as Access to Western Esotericism (1994), bucked the trend of the largely Guénon -inspired negative approach to Theosophy in French publishing and presented Theosophy in a more articulate and positive light.

Furthermore, William Quinn's 1997 The Only Tradition convincingly pointed out the salient problems of historical accuracy in Guénon’s 1921 Théosophisme (111-114). Sadly, all this did not stop a publisher from featuring a portrait of Blavatsky on the cover of a recent edition of Morning of the Magicians. Ironically, the more positive aspect of the Blavatsky mythology that developed around World War 2 figures in another landmark of literary pseudo-history, Thomas Pynchon's Gravity's Rainbow: "It is peacetime again now, no room for the Pigeons in Trafalgar Square on V-E Night, everyone at the facility that day mad drunk and hugging and kissing, except for the Blavatskian wing of Psi Section, who were off on a White Lotos Day pilgrimage to 19 Avenue Road, St. John’s Wood" (269).


That is not to say that Pauwels and Bergier did not have credentials. Pauwels was a successful novelist, journalist and editor and went on to have a successful career playing off the baby-boomer trends of the period. (Pauwels, Wikipedia). Bergier was a resistance fighter who was interned in a Nazi prisoner camp. He had a scientific background as well as an avid interest in science-fiction, helping to popularize H.P. Lovecraft in France. He went on to write many books on the supernatural and alternative science (Bergier, Wikipedia). Both were quite successful at using controversy and sensationalism in the mass media to promote their interest in the supernatural and paranormal investigation.


I think part of what made the book so successful is the literary savvy. Both authors are very familiar with supernatural fiction and the perception of Nazism in popular culture and deftly use a lot of the dramatic techniques of supernatural fiction in presenting something akin to a pulp science-fiction thriller; the addition of more specific historical references and alternative science is simply an extension of the feeling of believability that the supernatural literary techniques strive to instill.
The book actually reminds me of something out of a Jack Kirby comic book. Kirby, who was also influenced by American pulp science-fiction of the thirties and forties (although Chris Knowles has a more mystical take on Kirby’s inspiration), has explored similar themes throughout his career; for example, see his take on the whole Chariot of the Gods concept, in his Eternals series. Conclusion: as an imaginative pop culture literary influence addressing the hopes and fears of post-war industrial society, the book has a certain interest, as an experimental, intuitive alternative historical essay, it suffers from a woeful proliferation of inaccurate and sketchy information.
PS. Note that Blavatsky herself was precisely opposing the type of Satanistic world-view and demonizing tendencies of the monotheistic religions that she is being targeted with. Her critique of religion is mainly against what we would now term fundamentalism, which she described as a materializing and anthropomorphicizing of spiritual concepts. Hence, she considered the religious portrayal of the devil to be a myth, a superstition. Isis Uveiled, vol.2, chap. 10 is a very focused, well-researched essay on this question:
https://nexus.universaltheosophy.com/articles/unveiling-isis-2-part-10/
References:
Colavito, Jason. The Strange Case of "Morning of the Magicians" in Soviet Russia
http://www.jasoncolavito.com/blog/the-strange-case-of-morning-of-the-magicians-in-soviet-russia
Goodrich-Clarke, Nicholas. The Occult Roots of Nazism (1985)
Guenon, Rene, Letters from Guenon to Evola (X) http://www.gornahoor.net/?p=4693.
Kripal, Jeffrey J.  Mutants and Mystics: Science Fiction, Superhero Comics, and the Paranormal (2011)
Krueger, Frederic. “The Stargate Simulacrum: Ancient Egypt, Ancient Aliens, and Postmodern Dynamics of Occulture” Aegyptiaca. Journal of the History of Reception of Ancient Egypt No.1 (2017), 47-74
Knowles, Chris. Mind Bomb Prophecies of a Pop Astrognostic. https://secretsun.blogspot.com/2012/01/mindbomb-prophecies-of-pop-astrognostic.html
Lachman, Gary.  Turn Off Your Mind: The Mystic Sixties and the Dark Side of the Age of the Age of Aquarius (2001)
May, Andrew. Pseudoscience and Science Fiction (2017)
Pauwels, Louis & Jacques Bergier Le Matin des Magiciens (1960)
Pynchon, Thomas. Gravity's Rainbow (1973)
Quinn, William. The Only Tradition (1997)
Spence , Lewis.  Occult Causes of the Present War,(1940)
Wikipedia. Jacques Bergier https://en.wikipedia.org/wiki/Jacques_Bergier
Wikipedia. Louis Pauwels, https://en.wikipedia.org/wiki/Louis_Pauwels