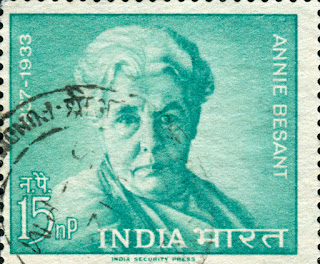 This is our final post covering 2017. In 2017, Annie Besant received a lot of attention, and so ironically Blavatsky received a lot of press in relation to both Nazism and Indian Independence. The year also saw a new publication concerning the Coulomb/Hodgson affair by Daniel Caldwell and many interesting academic publications. There was also the return of the Theosophical History journal, notably featuring a long letter by Blavatsky to Ralston Skinner. Another eventful year.

This is also most likely the final dense thematic post that I'll be doing. I've covered three years of news and it's clear that interest in Blavatsky remains strong and seems to be growing. I'm most impressed by the diversity of subjects that have been assembled, but I'd like to get away from the regular, systematic format. In the future, I'd like to focus more on original writing, with occasional posts on various topics.

Annie Besant And Her Dauntless Legacy Of Resistance

Ruchira Ghosh - April 6, 2018
Annie Besant was a noted philosopher, social reformer, women’s rights activist, besides being a prolific writer and orator. Her name remains inextricably linked with India’s struggle for freedom. She figures among world famous personalities who made India their home for good.
https://feminisminindia.com/2018/04/06/annie-besant-freedom-fighter/
Annie Besant: An inconvenient woman
Manu S. Pillai Oct 06 2017
One of the founders of Banares Hindu University, the scene of a woman’s agitation today, Annie Besant lived unconventionally, defiant of social norms, well before she came to India
https://www.livemint.com/Leisure/dgXf29xjFPwLz9gYAJotDN/Annie-Besant-An-inconvenient-woman.html
Gandhi Learned Hinduism From Blavatsky’s Occult Theosophy
Feb. 1st, 2018
Though the extent to which the occult Theosophical movement influenced Gandhi and Indian independence is not commonly known, it is well documented. It could also be said that the widespread influence of Eastern spirituality on Western culture that is so prominent today can be attributed largely to Blavatsky and Theosophy. Had she and her followers not taken the steps to influence Indian independence and the revivification of Hinduism, Indian history may have been different.
https://www.gaia.com/lp/content/blavatsky-theosophy-gandhi/
Posted by Mark Casady at 16:08