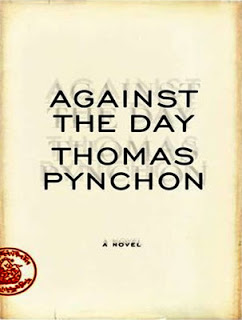 Gravity’s Rainbow
"It is peacetime again now, no room for the pigeons in Trafalgar Square on V-E Night, everyone at the facility that day mad drunk and hugging and kissing, except for the Blavatskian wing of Psi Section, who were off on a White Lotos Day pilgrimage to 19 Avenue Road, St. John’s Wood." (Gravity’s Rainbow, 269)
269.35 White Lotos Day pilgrimage 19 Avenue Road, St. John's Wood
The address was the one-time home of Annie Besant which became headquarters for Blavatsky (HPB) and the TS(!) -- Theosophical Society-- once Besant joined the group. HPB died on May 8th, 1891, and May 8th became White Lotos Day, commemorating the anniversary of HPB shedding her mortal coil. May 8th, 1945 was V-E Day, of course. May 8th interestingly enough was also the death day (different years) of Oswald Spengler and Gustave Flaubert. Oh, and as every school boy knows, May 8th is Pynchon's birthday!
https://gravitys-rainbow.pynchonwiki.com/wiki/index.php?title=Pages_269-278
Madame Blavatsky and the Theosophical Society - October 2, 2012
Thomas Pychon alludes to Madame Blavatsky and the Theospochical Society in an ironic way. Madame Eskimoff (Madame E) is so symbolic of Madame Blavatsky from the eccentric way she lives to the way she meditates to the way she attempts to philosophize. The T.W.I.T., also very ironically, is representative of an entity equal to the Theosophical Society. Pynchon interwines Madame Blavatsky’s “departure” and what’s left of the Theosophical Society with the arrival of another similar society so that the two then become very comparable, if not one and the same.
http://pynchonclass.blogspot.com/2012/10/madame-blavatsky-and-theosophical.html


Search for Shambhala in Against the Day
Blavatsky’s placement of Shambhala in the Gobi Desert is not surprising since the Mongols, including the Buryat population of Siberia and the Kalmyks of the lower Volga region, were strong followers of Tibetan Buddhism, particularly its Kalachakra teachings. For centuries, Mongols everywhere have believed that Mongolia is the Northern Land of Shambhala and Blavatsky was undoubtedly acquainted with the Buryat and Kalmyk beliefs in Russia.
https://against-the-day.pynchonwiki.com/wiki/index.php?title=Shambhala
Borrowed Time: Thomas Pynchon’s Against the Day and the Victorian Fourth Dimension
Science Fiction Studies #113 = Volume 38, Part 1 = March 2011 Justin St. Clair
In one notable scene, Lew Basnight and the T.W.I.T.’s “Grand Cohen” attend a séance presided over by a Spiritualist named Madame Eskimoff. The Grand Cohen, at the séance’s end, launches into a fanciful speculation on the nature of the Victorian age, gleefully commingling a number of hyper-spatial hypotheses to suggest that the “real” Queen Victoria may be elsewhere, held captive in a lateral world “impervious to the passage of Time in all its forms,” while the Queen Vic in our dimension is merely “a sort of ghostly stand-in” (231).
https://www.depauw.edu/sfs/backissues/113/stclair.html

Tantra in Pynchon’s Against the Day,
Critique: Studies in Contemporary Fiction, John Rothfork (2016):
although the aristocratic British complicate the American view since even the agents of T.W.I.T. (True Worshippers of the Ineffable Tetractys), keen competitors of Madams Theosophical Society (219), end up doing journeyman work for the British Foreign Office in the Great Game of seeking to control central Asia. Auberon Halfcourt (half in the service of the British Foreign Office and half the disciple of T.W.I.T. in search of Shambhala) explains that "all the meddling of the Powers has only made a convergence to the Mahommedan that much more certain" (758) in central Asia.
https://www.researchgate.net/publication/309362553_Tantra_in_Pynchon%27s_Against_the_Day

the T.W.I.T., on the other hand, is inextricably connected to the politics of Imperial England, with agents throughout the world. The association of the T.W.I.T. with the real historical personage of Madame Blavatsky and the Theosophical Society, mystics later exposed as charlatans (Lopez C), lends credence to Yashmeen’s suspicion that “it might be politics, or even some scheme to defraud” (AtD 224), pointing to the mutually exclusive goals of divinity and politics, enlightenment and economics.
https://doi.org/10.7766/orbit.v1.2.45
The Bride of Night: An Esoteric Journey in Against the Day
Sergej Macura.
https://ceenaswe.files.wordpress.com/2015/10/abstracts-ceenaswe-2-belgrade-2016.pdf
>
Against the Day Seal

The red seal on the cover is Tibetan, and the image in the center of the seal is a Tibetan snow lion in front of three mountain peaks. The snow lion is a mythical creature which also appears in Tibet's flag. The snow lion is one of the four dignities. The snow lion represents fearlessness, joy, and bliss.
The summit in the seal is Mt. Kailasch, considered the center of the world by both Hindus and Tibetan Buddhists. It also is considered the headwaters of the main river systems in nothern India, including the Indus and Ganges. The Kailasch in the seal, along with the foothills, and rivers bear a strong resemblance to traditional representations in thangka paintings.


The text in the seal is written in the Tibetan umé script, and can be represented (using the Wylie transliteration scheme) as: bod gzhung tshong gi don gcod (pronounced: bö shung tsong gi dön tjö), which means: Trade Representative of the Tibetan Government.
https://against-the-day.pynchonwiki.com/wiki/index.php?title=ATD_cover_analysis
The Deep Blavatsky are under-sand mountain ranges in Against the Day p. 434;

Krishnamurti in Ojai is mentioned in Inherent Vice, p. 186


Congratulation to Dewald Bester on his Doctoral Thesis where he gives a very modern/post-modern analysis of Blavatsky’s work via Roland Barthes, Jacques Derrida, Umberto Eco, Michel Foucault, etc…
HP Blavatsky, Theosophy, and Nineteenth-century comparative Religion
D Bester - ‎2018
A thesis submitted to the Doctoral Degrees Board at the University of Cape Town