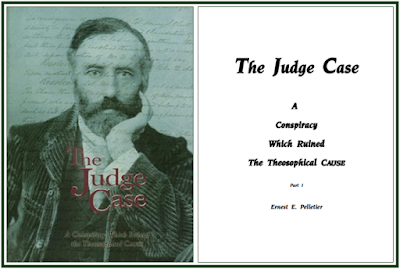 Published in 2004, this large hardcover volume generated a fair share of commentary and debate in the Theosophical community. The first section is a chronology which is an amazingly detailed bibliography of many very obscure theosophical publications and newspaper articles with brief descriptions and snippets, not just during Judge’s lifetime but with related accounts up until 2003. At 310 pages, this alone is a remarkably well-researched document.

For those who do not have the patience to wade through all of that material, the second section is a 130-page account of the events of the Judge case in 24 chapters, it forms what can be considered the central piece of the work. It is a well-written narrative that takes into account a lot of the lesser-known figures in the story, such as Richard Harte and Judge Khandalavala. One can say that it is faithful to Judge’s own take on the affairs and much research and speculation is given to support his position. Of note for its distinctiveness is chapter 17, titled ‘’Judge’s Initiation’’  which considers that Judge must have been through some sort of process of initiation during his trip to India in 1884. The Judge Case was a rather complex affair, with many underlying issues, and Pelletier does a good job at considering all of the unfortunate series of events that led up to that crisis.

That is not all – there is an entire second section, labelled ‘’Part 2’’, which contains a series of ten lengthy appendices which comprise another 500 pages, making for a 1000-page volume. Here we are given reproductions of the many pamphlets, articles and official documents that the affair generated (Olcott and Judge were lawyers by profession, after all). You also get all the material concerning the notorious Prayag letter debate, a lengthy and lively correspondence of Judge with Ernest Hargrove,  reproductions of two handwritten drafts of two of Judge’s final official letters, and much more. Moreover, there are two illustration sections, which reproduce various interesting items, mainly photographs of the prominent theosophists of the period.

It is more than just an account of the Judge affair, it practically covers much of the history of the Theosophical Society in the 19th century; it is a treasure trove of obscure documents and a gold mine for theosophical historians. This book is sure to be a valuable source book for theosophical enquirers for a long time to come.