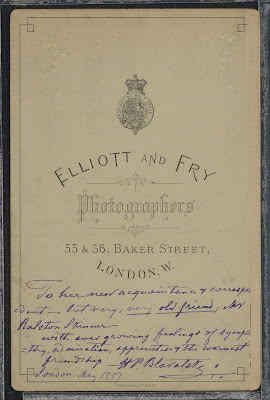 In Theosophical History Volume XVII, Issues 1-2 January-April 2016 (Double Issue)(https://theohistory.org/issue-archive/volume-xviii/) is published a transcription of a 35-page letter of Blavatsky to Ralston Skinner. It is an exceptionally lengthy letter, previously unpublished, and so it deservedly gets a royal treatment. Not only is the letter transcribed in full, but 12 pages of color photographic reproductions are also included.

Much commentary and background research has been provided to give a solid understanding of the letter: Contextualizing the Blavatsky-Skinner Letter: 17 February 1887 by Jeffrey Lavoie; J. Ralston Skinner (1830–1893) by Jerry Hejka-Ekins;  Editor’s Comments and Helena Petrovna Blavatsky: Activities from 1878–1887 by James A. Santucci (see https://theosophy.wiki/en/James_Ralston_Skinner )

Mr. Lavoie did the transcription, and Mr. Hejkra-Ekins, besides providing the helpful biography of Skinner, provides well-researched notes that elucidate the contents of the letter throughout.

At first I was a little disappointed because the letter seemed to be merely summaries of topics from Isis Unveiled and the Secret Doctrine without going into the very remarkable discussions on passages from Skinner’s Magnus Opus, The Source of Measures found in the Secret Doctrine. However, on a closer reading one can find many intriguing candid passages, often of a personal mystical nature, that give a unique glimpse of what her correspondence has to offer and why it is an important aspect of her collected writings.

Possibly the most revelatory aspect of the letter can be found on pp. 14-15, where she gives some additional variations of the cosmic/human evolution symbols found in the Proem of the Secret Doctrine (and in other sections). Ultimately, this letter can be said to contain all of the elements of eloquence, erudition, candour, exoticism, mystery and humour that makes Blavatsky such a fascinating historical figure. Therefore, one can consider this publication to be of great interest to Blavatsky students and scholars. Below is a brief attempts at a summary of the letter’s contents, with some extracts (the letter is in response to the question of which language is oldest, Sanskrit or Hebrew):

Pages 1-6 deal with the esoteric aspects of procreation and gestation and a summary of the five racial groups from the Secret Doctrine.

And of those  seven keys of Esoteric philosophy & the universal mystery language you have discovered one- say two-but you seem to scorn entirely its first key-the one which opens the earliest, metaphysical & abstract portion of the philosophy, the paradigms of all things, the divine & spiritual models of its physiological & astronomical aspects. (pp. 1-2)

For I have studied Occultism & Esotericism practically & for practical use, not theoretically; e.g. when I see a certain symbol of the mineral kingdom- say-I know at a glance its relation to the vegetal, animal & human (or psychic) realm.

And I know also to what objects in the physical world & Forces in the noumenal world the 49 weeks of gestation of the primitive men (or child) in ‘’the lunar egg’’- corresponds to. (p. 3)

Pages 7-13 deal with a scholarly discussion of the age of the Hebrew language and the Old Testament, of which Blavatsky has written extensively.

And as you have shown, it is also in the New T. and this proves that the Initiates who wrote the Synoptics & St. John-were of the same school of Initiates as the Essenes, the Egyptians, & the Greeks; especially, as St Paul was.(12)

Pages 14-15 discuss the symbols of evolution from the Proem of the Secret Doctrine, with some variations.

The Jews have never & at no time been monotheists-not as the word is understood in the West, though they may have been as some Hindu sects are now who choose a favourite god among the Devas & make the rest subservient to that creature. The early Jews were Pantheists as we are & the later-humbugs. (14)

Pages 16-20 Discuss the Theban trinity of Amon, Mout, Khonsou, the Egyptian sarcophagus and its relation to sacred cow in India (Holy of the Holies), and a discussion of the words Abraham and Brahma.

This is why, perhaps, Adam (the phallus, too) is said in Maimonides (More Novachim) to have been regarded as the ‘’prophet of the moon’’ by some Semitic nations. By the way the world has never known much, I believe, of Maimonides. (16)

Pages 21- 23 discuss comparisons of the bible with the Vedas, with elements of numerology and symbolism and the zodiac

And now I can tell you, that if you could only get at the Hindu Zodiac, its twelve signs, did you but know Sanskrit-they would reveal to you the whole evolution of Kosmos,-for they do represent this mystery, surely. Only one has to be initiated in the secret reading of the Mantras & their rhythmical melody, and of the Tantra Shastras (works on incantations & magic). (23)

Pages 24-28 discuss the esoteric explanation of Mantras and seven levels of symbolism, cycles and the number 432.

Then, there are 7 synonyms for every word in the ancient books, with other meanings besides the one used exoterically.

Then you have to find out the numerical value of all the letters of a certain word & the same value of each syllable in that word-which value is different.

Then you must permute these different syllables & examine the new combinations. And if, the values of the syllables & the letters correspond-then you have the right meaning. (25)

Pages 29-35 Various esoteric and Masonic discussion, included is a sketch of a Sanskrit talisman to be sent to Skinner

And I guess that if even poor I gave you the strong grip of the Lion’s paw of the tribe of Juda, you would see & find that even I may know something more than your Pikes & Princes of Wales-bless their dear innocent Souls. (32)

This is just why  we worship no more brahmâ (single male) than his seven, nine, ten & 21 Prajapâtis, Rishis,  Dhyan Chohans-call them what you like-his plural aspects in short. But they exist nevertheless. We honour these aspects, but would no more think of praying to them, or ministering or propitiating them, than the ‘’faces of Moses’’ on the moon. We recognize them, that’s all, occasionally-we feel them. They can help us; but only when Karma permits them to; since they are as much under the inalterable & immutable Law of Karma, as we are ourselves. They-all of them-have been, are, or will be men.(32-33)

Ah dear dear sir; no woman in her right senses, not a man either, would go willingly into such hell as I have, & persisted in having Spiritualists, Christians, Materialists, Scientists, & the whole world with  two thirds of our own Theosophists to boot against me, if I had not been forced by my oath & vows to do so. I have lost friends, country, money & health to serve only as manure for the field of future Theosophy. (35)