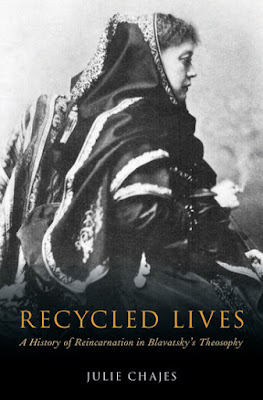 There’s been a lot of confusion about Blavatsky’s views on reincarnation in Isis Unveiled. This book is a definite improvement, excellent research. Sometimes with these academic studies Blavatsky’s voice gets a little lost among all the theorizing, so lets open with a short excerpt from Blavatsky (My understanding of the text below is that she is positing a universal perennialist theory of reincarnation based on Hindu and Buddhist concepts, showing how these ideas are present in other traditions. There are a few confusing sentences in this section, which Blavatsky clarifies in Theories About Reincarnation and Spirits,The Path, November, 1886, but it seems clear that she is accepting the basic Hindu and Buddhist premises):

Thus, like the revolutions of a wheel, there is a regular succession of death and birth, the moral cause of which is the cleaving to existing objects, while the instrumental cause is karma (the power which controls the universe, prompting it to activity), merit and demerit. "It is, therefore, the great desire of all beings who would be released from the sorrows of successive birth, to seek the destruction of the moral cause, the cleaving to existing objects, or evil desire." They, in whom evil desire is entirely destroyed, are called Arhats.* Freedom from evil desire insures the possession of a miraculous power. At his death, the Arhat is never reincarnated; he invariably attains Nirvana — a word, by the bye, falsely interpreted by the Christian scholars and skeptical commentators. Nirvana is the world of cause, in which all deceptive effects or delusions of our senses disappear. Nirvana is the highest attainable sphere. The pitris (the pre-Adamic spirits) are considered as reincarnated, by the Buddhistic philosopher, though in a degree far superior to that of the man of earth. Do they not die in their turn? Do not their astral bodies suffer and rejoice, and feel the same curse of illusionary feelings as when embodied?

What Buddha taught in the sixth century, B.C., in India, Pythagoras taught in the fifth, in Greece and Italy. Gibbon shows how deeply the Pharisees were impressed with this belief in the transmigration of souls.* The Egyptian circle of necessity is ineffaceably stamped on the hoary monuments of old. And Jesus, when healing the sick, invariably used the following expression: "Thy sins are forgiven thee." This is a pure Buddhistical doctrine. "The Jews said to the blind man: Thou wast altogether born in sins, and dost thou teach us? The doctrine of the disciples (of Christ) is analogous to the 'Merit and Demerit' of the Buddhists; for the sick recovered, if their sins were forgiven."† But, this former life believed in by the Buddhists, is not a life on this planet, for, more than any other people, the Buddhistical philosopher appreciated the great doctrine of cycles.

The speculations of Dupuis, Volney, and Godfrey Higgins on the secret meaning of the cycles, or the kalpas and the yugs of the Brahmans and Buddhists, amounted to little, as they did not have the key to the esoteric, spiritual doctrine therein contained. No philosophy ever speculated on God as an abstraction, but considered Him under His various manifestations. The "First Cause" of the Hebrew Bible, the Pythagorean "Monad," the "One Existence" of the Hindu philosopher, and the kabalistic "En-Soph" — the Boundless — are identical. (Isis Unveiled I, 346-347)

This study historicises and contextualises the rebirth doctrines of Helena Petrovna Blavatsky (1831–1891), the matriarch of the Theosophical Society and one of the most influential women of the nineteenth century. It analyses Blavatsky’s complicated theories about the cosmos and its divine source as presented in her two seminal Theosophical treatises, Isis Unveiled (1877) and The Secret Doctrine (1888), as well as her articles and letters. The book argues that Blavatsky taught two distinct theories of rebirth and that the later one developed from the earlier. It reveals Blavatsky’s appropriation of a plethora of contemporaneous works in the construction of these doctrines and contextualises her interpretations in nineteenth-century intellectual and cultural life. In particular, it explores Blavatsky’s adaptations of Spiritualist ideas, scientific theories, Platonism, and Oriental religions, which in turn are set in relief against broader nineteenth-century American and European trends. The chapters come together to reveal the contours of a modern perspective on reincarnation that is inseparable from the nineteenth-century discourses within which it emerged. In addition, it reveals some consequential, perhaps unexpected, and evidently under-acknowledged historical roots of the reincarnationism that is so popular in today’s postmodern world.

Serious attention is finally being given to the Russian Helena Petrovna Blavatsky (1831–1891) and her theories about reincarnation, which have impacted many modern spiritual, religious, and esoteric thinkers for more than a century. Since the end of the nineteenth century, quite a number of biographies about Blavatsky have appeared, but few academic books about her ideas have been published. Julie Chajes’ book, Recycled Lives: A History of Reincarnation in Blavatsky’s Theosophy, which springs from her doctoral work supervised by the late Nicholas Goodrick-Clarke, is therefore a very welcome contribution to a steadily growing area of research. Blavatsky is one of those thinkers who is frequently mentioned in studies, but often without depth or elaboration, as she is perceived to be difficult to read. In contrast, Chajes argues that even though Blavatsky’s work is perceived to be difficult, incoherent, or even to defy exegesis, there is in fact method to the madness (185–186).

This method, concerning reincarnation, is what Chajes has set out to uncover in a historical manner by contextualizing Blavatsky’s theories in relation to discussions at the time. This quest is mirrored in the structure of the book. It offers insight into the theories in Blavatsky’s Isis Unveiled (45–64) and The Secret Doctrine (65–86) and, in addition, discusses the following relevant contexts: Spiritualism (87–107), Platonism and Pythagoreanism (108–131), Science (132–159), and Hindu and Buddhist thought (160–183). https://online.ucpress.edu/nr/article-abstract/23/3/116/106984/Review-Recycled-Lives-A-History-of-Reincarnation?redirectedFrom=fulltext