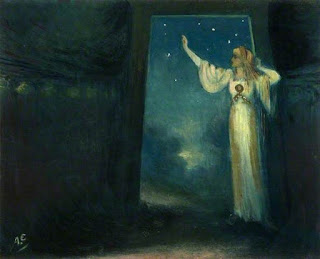 all images by George Russell

Hidden Aeons: Searching for a literary relic –
Brian J Showers - Mon, Apr 10, 2017
Yet despite all this, the name A.E. is still imbued with a certain magic, a presence that gathers around it the like-minded, drawing with a natural magnetism, ears straining to hear old traces of the new songs of Ireland. And just as they did during his lifetime, readers, historians, writers, mystics, activists, poets, students, organisers, politicians, artists, and the open-minded are still discovering kinship in A.E. and his works.
http://www.irishtimes.com/culture/books/hidden-aeons-searching-for-a-literary-relic-1.3043433 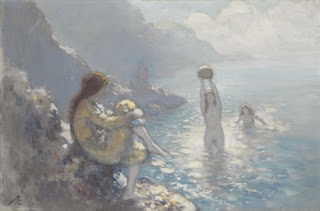 Hairy fairy revisited – An Irishman’s Diary on George Russell
Brian Maye - Mon, Apr 3, 2017
He was a poet, painter, playwright and nationalist who wrote on economics and politics, and the list of names of those who attended his famous “soirées” at his home in Rathgar reads like a “who’s who” of the Dublin of his time.
There he met WB Yeats, who introduced him to theosophy. He joined the Theosophical Society in 1890, his membership certificate being signed by Madame Blavatsky, the Russian founder of the society.
http://www.irishtimes.com/opinion/hairy-fairy-revisited-an-irishman-s-diary-on-george-russell-1.3032543 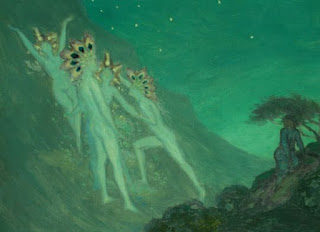 Delving into the arcane: the legacy of Æ’s hidden murals
Aidan Dunne - Sat, Jul 5, 2014
Established in New York in 1875 by a small group of people centred on Helena Blavatsky, Henry Steel Olcott and Dublin-born William Quan Judge, the society held that a body of ancient, hidden knowledge lay behind all the world’s religions and, similarly, that hidden laws lay beyond the bounds of conventional scientific thought.
In Ireland, George Russell (Æ), James M Pryse and others set up a branch in Dublin, based at number 3 Ely Place. “It was a kind of commune and in many ways idealistic, even utopian,” says Moore. “The theosophists were, and are, completely non-sectarian. They believe in universal freedom and equality.”
Though it sounds as if it might be a religious cult, he points out: “It’s not. It ambitiously aimed to synthesise elements of science, philosophy and religion.”
http://www.irishtimes.com/culture/art-and-design/delving-into-the-arcane-the-legacy-of-%C3%A6-s-hidden-murals-1.1853925 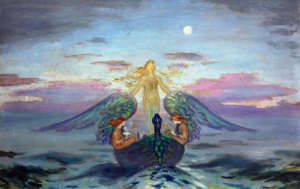 Recent Wall Street Journal article on Piet Mondrian mentions Blavatsky:
Mondrian was attracted to both Catholic mysticism and Theosophical religious ideas around 1908. Theosophy—founded on the beliefs of Helena Blavatsky—stressed that a divine structure was hidden beneath everyday appearances. In 1915, the artist was briefly drawn to Christosophy—a merging of Theosophy with Christian theology created by a former Catholic priest. Mondrian had begun his diamond paintings before he broke away from Christosophy four years later.
http://www.wsj.com/articles/a-starry-christmas-1482522700 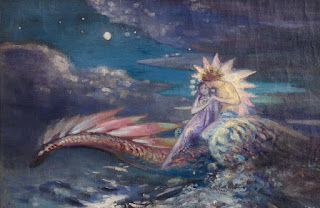 Will Heinrich- March 9, 2017
The son of a colonel in the imperial Russian Army, Alexei Jawlensky was 18 and a cadet when a visit to the All-Russian Exhibition of Industry and Art in Moscow in 1882 changed his life by introducing him to painting. Eventually he moved to Munich with Marianne von Werefkin, another artistic expat from the nobility, vacationed with Kandinsky, bought a van Gogh and studied Buddhism, yoga and theosophy.
https://www.nytimes.com/2017/03/09/arts/design/from-alexei-jawlensky-abstract-faces-at-full-intensity.html?_r=1
Posted by Mark Casady at 16:19