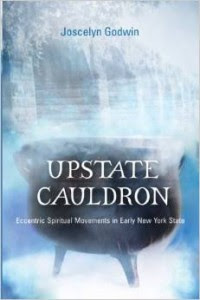 Joscelyn Godwin has concocted a frothy, bubbling brew of mystery and magic in 19th century American alternative religion in his New York state cauldron for you to jump in. By the pricking of my thumbs, somewhere upstate, a cauldron comes.
Publishers’s Page
From 1776 to 1914, an amazing collection of prophets, mediums, sects, cults, utopian communities, and spiritual leaders arose in Upstate New York. Along with the best known of these, such as the Shakers, Mormons, and Spiritualists, this book explores more than forty other spiritual leaders or groups, some of them virtually unknown, but all of them fascinating. The author uncovers common threads that characterize these homegrown spiritualities, including roots in Western esoteric traditions, liberation from the psychological pressures of dogmatic Christianity, a preoccupation with sex, and involvement in the radical reform movements of the day. In addition to maps and photographs of surviving buildings and monuments, the book also features a gazetteer of sites listing 150 locations connected to these groups, which may be used as a helpful travel guide to the region.
http://www.sunypress.edu/p-6033-upstate-cauldron.aspx
Review by Nicole Gray
There are chapters on Madame Blavatsky and Theosophy, Cyrus Teed's hollow earth and Koreshanity, and even literary connections like L. Frank Baum, whose The Wonderful Wizard of Oz (1900) hints of Baum's interest in Theosophy. Godwin concludes with a brief foray into the twentieth century with Elbert Hubbard and Gustav Stickley, "emphasizing the spiritual side" of these two figures and its contribution to the development of the Arts and Crafts movement, though neither Hubbard nor Stickley was expressly affiliated with any religion (p. 276). His final chapters cover New York architect and Theosophist Claude Bragdon and a series of modern-day movements and still-extant upstate communities with New Age, Eastern, and occult practices and beliefs.
https://networks.h-net.org/node/15697/reviews/91318/gray-godwin-upstate-cauldron-eccentric-spiritual-movements-early-new

Magonia Review of Books
Joscelyn Godwin’s fascinating study shows that these were just the headliners; there was a multiplicity of support acts, large and small. Some were offshoots of Christianity; others were more diverse; some celebrated sex in one way or another; others preached strict abstention; some were in the forefront of racial rights and women’s rights – which, he says, “worked hand in hand”, at least until the Civil War. And then there were the sleeping preachers… http://pelicanist.blogspot.ca/2016/06/

Quest Magazine
Theosophists appear several times in this history, not just HPB and Henry Steel Olcott, but others less known, notably Matilda Joslyn Gage, who coauthored the History of Woman Suffrage with Elizabeth Cady Stanton and Susan B. Anthony. Mrs. Gage was to become the mother-in-law of L. Frank Baum, passing along her interest in Theosophy to him. Baum would go on to author the Oz series of children’s books, which Godwin notes have both Theosophical and Gnostic elements. Godwin also reminds us that it was Josephine Cables, a Theosophist in Rochester, New York, who helped rouse the Theosophical Society in America out of the dormancy it had fallen into after the departure of HPB and Olcott for India in 1878. In 1882 she applied to the Adyar headquarters for a charter for a Rochester branch. It was the first American branch to be chartered since the TS’s founding in 1875.
https://www.theosophical.org/membership/renew/310-publications/quest-magazine/book-reviews

K. Paul Johnson
Hiram Edson’s vision of Christ in the cornfield in 1844 (see chapter 8), which became the theological foundation of Adventism, happened between Clifton Springs and Port Gibson. That is about five miles from the Sacred Grove outside Palmyra, where in 1820 Joseph Smith met God the Father and Jesus Christ, and about four miles from Hydesville, where in 1848 the Fox sisters started talking to the dead. So three lasting religious movements—Adventism, Mormonism, and spiritualism, were all sparked off in that little triangle.
http://www.historyoftheadepts.com/historyoftheadepts/?p=1759
Posted by Mark Casady at 13:23