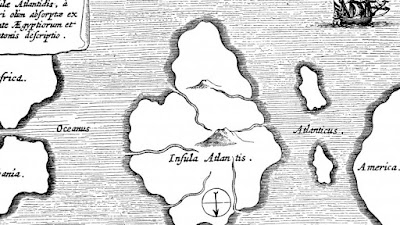 Although often misrepresented, with  subsequent later developments retroactively attributed to Blavatsky, her theory of Atlantis continues to fascinate and is firmly ensconced in the alternative spirituality world view:


The Strange History of Atlantis – Benito Cerino
http://www.grunge.com/77738/strange-history-atlantis/
Little known facts about the mysterious Atlantis.
Of course, Atlantis is mentioned, and sometimes becomes the Central figure of the mass of occult documents. Most strongly promote the myth was influenced by Blavatsky, who described in his “Secret doctrine” the evolution of the Fourth root race that was taking place in Atlantis. It’s amazing how this controversial literature has influenced the image of the lost continent in culture.
http://micetimes.asia/little-known-facts-about-the-mysterious-atlantis-photo/

New Age presentation of Blavatskian evolutionary theories: Ancient Civilizations: The Theories of Atlantis and Lemuria
Was Atlantis simply a figment of Plato’s imagination, spurred by nationalistic pride when writing about his beloved Athens, or are there fragments of truth in these ancient myths, passed down and swirled about in the sands of time… Are we heading for the same fate? Or will we merely continue on, ever-evolving and seeking out new answers yet always returning once more to search the bottom of the murky ocean floors.
http://mysteriousearth.net/2017/05/18/ancient-civilizations-the-theories-of-atlantis-and-lemuria/

Article on Atlantis with Blavatskian Atlantis theories:
One of the most interesting parts of this story, to me, is the fact that this place is often remembered as a place of glory, light, and abundance, which it was. But they were not immune to the dangers of avarice, either, as H.P. Blavatsky makes clear: “...In consequence of this, war was declared, the story of which would be too long to narrate; its substance may be found in the disfigured allegories of the race of Cain, the giants, and that of Noah and his righteous family. The conflict came to an end by the submersion of the Atlantis, which finds its imitation in the stories of the Babylonian and Mosaic flood.”
http://www.collective-evolution.com/2016/01/19/a-detailed-description-of-the-lost-land-of-atlantis-the-real-reason-for-their-downfall/

Alamongordo post on Atlantis – This is more of a neo-Theosophy post and therefore only about half the information here is really from Blavatsky:
Helena Petrovna Blavatsky - January 26, 2017
http://www.alamongordo.com/helena-petrovna-blavatsky/

Email ThisBlogThis!Share to TwitterShare to FacebookShare to Pinterest
Labels: atlantis