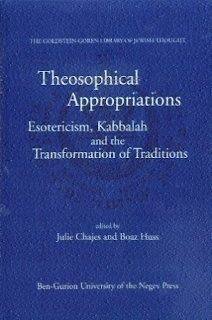 Theosophical Appropriations: Esotericism, Kabbalah, and the Transformation of Traditions, edited by Julie Chajes and Boaz Huss
The Goldstein-Goren Library of Jewish Thought Publication no. 21 - of the Negev Press / The Bialik Institute, , 2016
Appreciation of the historical importance of the Theosophical Society (henceforth, TS) and related movements is growing, and rightly so, yet the extent of theosophical influences can still be surprising, even to scholars in the field. The chapters of this volume contribute to our increasing recognition of the global impact of the TS and its ideas and illustrate lesser-known instances of theosophical appropriation aroundthe world.
https://www.academia.edu/28144662/Theosophical_Appropriations_Esotericism_Kabbalah_and_the_Transformation_of_Traditions_edited_by_Julie_Chajes_and_Boaz_Huss
Julie Chajes -  Construction Through Appropriation: Kabbalah in Blavatsky’s Early Works p. 33
In the opening paper, Julie Chajes discusses two of Blavatsky’s early works that refer to Kabbalah: “A Few Questions to Hiraf” (1875) and Isis Unveiled (1877). The chapter elucidates Blavatsky’s doctrines of Kabbalah in those texts, each of which have distinct emphases. (Intro 11)
https://www.academia.edu/26543875/Construction_Through_Appropriation_Kabbalah_in_Blavatskys_Early_Works
https://www.youtube.com/watch?v=fQnvizvv5S0

Isaac Lubelsky -  Friedrich Max Müller vs. Madame Blavatsky: A Chronicle of a (Very) Strange Relationship p. 73
In the following chapter, Isaac Lubelsky charts the relationship between Madame Blavatsky and the renowned German-born Oxford Orientalist, Friedrich Max Müller (1823-1900). Blavatsky’s references to Müller are often mentioned in passing in accounts of her sources, but this is the first detailed exploration of this topic, looking at the relationship from both sides. (Intro 13)
https://docs.wixstatic.com/ugd/5d1f91_77de77481c854b4f9f10a12c464ef72d.pdf
https://www.youtube.com/watch?v=uJRlXz6lBr0

These demonstrate, Deveney argues, that the Society as established in 1875 was devoted to practical occult work, and specifically to the development of the ability to project the astral double. This ability was considered an indication of the fusion of the student’s “individuality” with their “divine spirit” to create an “individualized”entity capable of surviving death.
https://www.youtube.com/watch?v=6BKVCI882gQ


Boaz Huss  - “Qabbalah, the Theos-Sophia of the Jews:” Jewish Theosophists and their
Perceptions of Kabbalah

Huss surveys the numerous books and articles of Jewish theosophists, demonstrating that overall, Jewish theosophists had greater access to primary texts of Kabbalah than did non-Jewish theosophists, and some even had enough knowledge of Hebrew and Aramaic to prepare their own translations. Nevertheless, their knowledge of primary sources was limited and even those who did have some language skills largely based themselves on secondary literature, including Western esoteric, theosophical, and academic texts.
https://www.academia.edu/28239752/Qabbalah_The_Theos-Sophia_of_the_Jews
https://www.youtube.com/watch?v=--dl6zYMuEA

Shimon Lev - Gandhi and his Jewish Theosophist Supporters in

Lev discusses the political activism of these Jewish theosophists, their involvement in the satyågraha struggle and their friendships with Gandhi, which were often very close. Lev highlights the tension between South-African Jewish identification with the ruling white elite and Jewish critique of that establishment, speculating about a self-perception shared between Jews and Indians as “Oriental” immigrants in . He notes the appeal of a Theosophical Society that enabled the exploration of unorthodox ideas but which, at the same time, did not require the abandonment of Jewish identity.
https://www.youtube.com/watch?v=K7cYTbb61OE