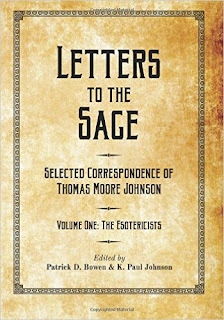 The theosophical historians continue to dig up some surprising treasures from the vaults. It turns out that the American Platonist Thomas Moore Johnson was a card-carrying Theosophist and left behind a sizeable chunk of correspondence with quite a few Theosophists of the day. So we have in this volume letters from J.D. Buck, Josephine Cables, Abner Doubleday, William Q. Judge, Anna Kingsford, Kenneth MacKenzie, Edward Maitland, Damodar Mavalankar, GRS Mead, HS Olcott, William Oxley, Seth Pancoast, James Pryse and John Yarker among others.
It`s a real treat to be able to get first hand accounts of the interests, challenges and struggles of the very early days (the letters date from 1881 to 1911). There is also much correspondence dealing with the administrative business concerning The Platonist, the magazine Johnson published. Most of the correspondence is fairly brief and mundane with little in the way of practical esoteric information (with the exception of James Pryse), although each section has a helpful introduction and copious explanatory footnotes. But the real meat of the book is the letters from  lesser-known Theosophists Elliott B. page (55 pp.) and S.H. Randall (79 pp.). Here we have sufficient material to form a serial narrative arc, each with their own personal, dramatic twists and turns with two very different fates: Page went on to become a distinguished long-standing Theosophist with the Hargrove Theosophical group and Randall had to bow out due to family pressures.
To spice things up, many letters discuss the well-known Hermetic Brotherhood of Luxor affair. This is all water under the bridge, but back in the day, GRS Mead hashed it out in Lucifer (p.54).
http://www.iapsop.com/archive/materials/lucifer/lucifer_v5_n25_september_1889.pdf
Editor Patrick D. Bowen, in his extensive, well-researched introduction, more or less follows the tack set by Joscelyn Godwin and John Patrick Deveney in their works on the subject.
For historians, this book should be quite useful as it fills in a noticeable gap of information pertaining to the 1880-1885 period of American Theosophy, prior to William Q. Judge’s founding of the Path magazine in 1886, beginning a remarkable ten-year run that was one of the greatest expansion periods for any organisation in modern American alternative spirituality history. Keeping in mind that the Coulomb /Hodgson affair occurred just prior to the HBL business, certain letters would seem to indicate that the crisis of the 1885-86 affected the American section more seriously than previously believed. Moreover, it probably also gives more information on the history of the TS Esoteric Section inasmuch that more evidence is given in favor of the idea of the HBL affair having spurred the creation of the ES. Also, there is lots of general coverage of the esoteric movement of the late 19th century period.
On the critical side, whether Johnson’s participation in various esoteric groups is his “greatest legacy” (p. 82) seems a little overly optimistic in my opinion, I don’t think this new information will overshadow his reputation as a prominent, pioneering American Platonic scholar. Also, it would have been nice to have more biographical information about Johnson himself beyond the context related to the correspondence. Moreover, the last part of the introduction seems to branch off into digressions and speculations that seem unfocused, while ignoring, for example, the correspondence with GRS Mead, his letter of 1911 of which is the lastest of the collection.

Letters to the Sage: Selected Correspondence of Thomas Moore Johnson: Volume One: The Esotericists
http://www.academia.edu/23150366/Letters_to_the_Sage_Selected_Correspondence_of_Thomas_Moore_Johnson_Volume_One_The_Esotericists 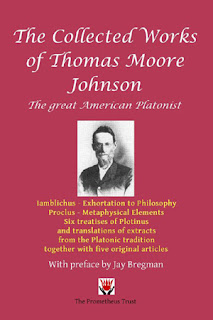 Prometheus Trust has also released The Collected Works of Thomas Moore Johnson:
Thomas Moore Johnson (1851-1919) can rightly be said to be a great American Platonist: he was one of a number of men and women of that period who sought to promulgate the philosophy of the Platonic tradition as a spiritual and intellectual discipline. Had not the tide of rationalist and sceptical thinking run so strongly in the last one hundred years, Johnson – along with his fellow philosophers such as Hiram K Jones, William Torrey Harris and Bronson Alcott – would today be recognised as a great contributor to the cause of true philosophy in the modern west.
http://www.prometheustrust.co.uk/html/other_books.html#tmj