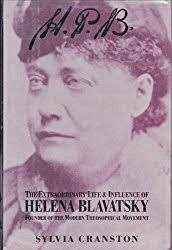 I forgot to include this in my Lachman post, nice article:
Who was Madame Blavatsky?
Gary Lachman - Friday 13th, March 2015
Colin Wilson once remarked about Rasputin, Blavatsky’s countryman, that he seemed “to possess the peculiar quality of inducing shameless inaccuracy in everyone who writes about him.” The same could be said for Madame Blavatsky.
http://www.watkinsmagazine.com/who-was-madame-blavatsky
New World Encyclopedia entry (they publish cleaned-up wikipedia articles), not bad, fairly balanced:
Helena Blavatsky
Helena Petrovna Hahn (also Hélène) (July 31, 1831 (O.S.) (August 12, 1831 (N.S.)) - May 8, 1891 London), better known as Helena Blavatsky (Russian: Елена Блаватская) or Madame Blavatsky, born Helena von Hahn, was a founder of the Theosophical Society. Although her role as a medium would prove controversial and the Theosophical Society would split following her death, her writing represents a significant contribution to the development of reformist and universal tendencies within Indian thought. Mahatma Gandhi wrote that her Key to Theosophy was one of the texts that stimulated him to ‘read books on Hinduism’ and ‘disabused [him] of the notion fostered by the missionaries that Hinduism was rife with superstition.’ [1] Perhaps the fact that Blavatsky was not in any way affiliated with the imperial project in India freed her of the obligation to value everything European at the cost of everything Indian.
http://www.newworldencyclopedia.org/entry/Helena_Blavatsky

May 5, 2017 - Theosophy Watch |
“The portrayal of Blavatsky is neutral, though more sympathetic than works of this kind. The index contains 16 references to her. What Horowitz manages to do, and successfully so, is to show the contribution to the inner life of America by these often disparate figures who were united in their vision of a world made better by better people.”
https://theosophywatch.com/2017/05/05/h-p-blavatsky-her-extraordinary-life-and-influence/


The Astral Visions of Madame Blavatsky

Someone made an audio version of the Secret Doctrine – wow:
https://www.youtube.com/watch?v=lcU1JdbZjJg

Email ThisBlogThis!Share to TwitterShare to FacebookShare to Pinterest
Labels: biography