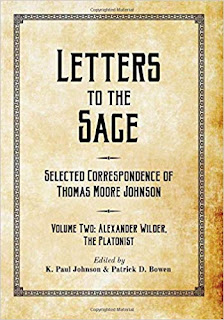 K. Paul Johnson (Contributor, Editor), Patrick D. Bowen (Editor), Ronnie Pontiac (Introduction), Erica Georgiades (Contributor),
This 438 page tome is well-stocked, dealing mainly with Alexander Wilder’s letters to Thomas Moore Johnson. Wilder gives a few intriguing but minimal anecdotes concerning Blavatsky (mention is made to the typically colorful, picturesque and erudite Blavatsky letter published in The Word, July 1908) , with a little more on Olcott. William Q. Judge, J.D. Buck and Abner Doubleday also get a few mentions. Wilder is interesting, not only because of his learned Platonic and Theosophical writings, but because he was involved with a wide variety of circles in the effervescent alternative spirituality movement of the nineteenth century for over fifty years. He was very much committed to the cause of alternative medicine, was acquainted with the mystic Andrew Jackson Davis, the American Platonist movement of Amos Bronson Alcott, Hiram K. Jones and William Torrey Harris , with the Concord School of Philosophy, and the later American Akademe   as well as the new thought movement with Leander Edmund Whipple’s Metaphyscial Magazine. His commitment and contributions to these causes are impressive. The correspondence gives a privileged view of the American alternative spirituality scene of the era and it is good to see a rediscovery of his works along with a recent four-volume anthology of his writings, edited by Mark Jaqua.
There are a total of 167 letters to Johnson, a hundred of which are from the 1881 to 1888, a period corresponding to the main years of publication of the Platonist magazine and forms the meat of the book. There is a solid 70-page biography of Wilder, a glossary of Ancient Greek terms used in the letters, a summary of the letters, a good index, an interesting biography of Sarah Stanley Grimke related to Christian Science and the Hermetic Brotherhood of Luxor, and some added miscellania.
One is impressed with Wilder’s remarkable work ethic and accomplishments, but at the same time, one can notice a certain aloofness, a reluctance to commit wholeheartedly in one direction, a cautious wariness to join a cause. It is interesting to look into the reasons for this, not to condemn Wilder, but inasmuch as it shines light on the problems the alternative spirituality movement was faced with. We see how Wilder a) had domineering parents who tried to push him into the clergy; b) had a bad experience in a culty commune with dubious practices; c) was very much steeped in the individualism philosophy of Ralph Waldo Emerson ; d) despite his mystic bent, was steeped in the dry empirical intellectualism of the era; e) his professional commitments made him very cautious about his personal reputation. And it is likely that for these reasons that, although the vitality of the movement assured him a steady outlet for his writing efforts, his considerable output was never collected into book form in his lifetime and he had become a somewhat forgotten figure.
What strikes me about the eclectic, individualistic nature of the period is how similar it is to the more modern new age movement of the later twentieth century. And so looking back at Wilder’s era with a work such as this gives us an opportunity to do, one can sense that the new age movement did not necessarily begin with Alice Bailey, Carl Jung, Jack Kerouac, Carlos Castaneda, Alan Watts, Maharishi Mahesh Yogi et al, but this type of bold, eclectic, experimental, individualistic, modernistic, protean spiritual searching already had a certain development formed in the 19th century currents of spiritualism, new thought, and alternative Christianity, a discernable proto-new age outlook. In that sense, Wilder can be seen as a kind of intellectual new age precursor to the likes of a Ken Wilber
The Theosophical Society can be seen to have attempted to unify things intellectually, with its international, esoteric and eastern outlook, into a more cohesive movement. Although it was only partially successful, it did manage to introduce more traditional, esoteric and eastern influences into the alternative spirituality mix. And Wilder himself accepted and even influenced certain aspects of Theosophy while rejecting others. This could be indicative of the general lack of success that Theosophy had with intellectual mystical writers (such as James Ralston Skinner, Anna Kingsford, William Stainton Moses, Alfred Percy Sinnett, Gerald Massey, Laura Holloway, Mabel Collins, and Frederick Myers) despite some initial promising collaborations and it is possible that they changed their strategy in the mid-1880s, aiming for a more popular approach. It seems that Theosophy was just too new and different for the time to make much of an intellectual impact. 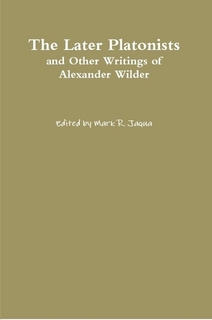 Despite this, Johnson and Wilder’s platonic enterprise seems to have coincided with the Theosophical Society’s ‘golden era’ (1875-1995) and so one suspects a certain productive synergy at work between the two movements (Ultimately, the death’s of Alcott and Jones spelt the end of the movement). Moreover, it now becomes more apparent that Johnson and Wilder’s platonic publishing efforts had an appreciable influence on the considerable revival of interest of Plato and Neoplatonism that was to develop in the twentieth century, a work that is still in progress. Wilder can be seen here to be situated in a central American intellectual current  of the era (call it later Transcendentalism). It will be interesting to see what the significant relation between Theosophy and Platonism will be in the twenty-first century.
On a critical note, the letter of August 1, 1907 (p.303) is one of the more candid ones, coming at a complicated historical juncture, notably with mention of the likes of the under-studied neo-theosophist Harold Percival and G.R.S. Mead, but it unfortunately receives no end note explanations, which are otherwise plentiful.
ps. see recent four volume Collected Writings of Alexander Wilder:
http://www.lulu.com/shop/search.ep?contributorId=1462412
Posted by Mark Casady at 12:13