Blavatsky Letter to Wilder from India 2/2


I will not stop to tell you of the beautiful avenues of centenarian trees full of monkeys above and fakirs below, neither of the Ganges with its blue waters and crocodiles. But I remind you of the ancient city mentioned in the Mahabarata near which took place all the fights between the Solar race and the Lunar.(8) The ruins of that city are four miles from Cawnpur, whole miles of fortresses and temples and palaces with virgin forests growing out of the room's, and monkeys again on the top of every stone. We went there on a she-elephant called ''active Peri'' (Tchamchoala Pari). Can't say that the ride on its back gives you any foretaste of the joys of heaven. There was no howda on it, and I for one, sitting on her tail, which she lovingly twirled around my legs, felt every moment a sensation something between sea-sickness and a fall during a nightmare. Olcott was perched on her left ear; Scott, a fellow of ours, a new convert, on the other; and Moolja Thecheray on her back. But the elephant was the securest vehicle and guide in such a journey. With her trunk she broke all the boughs before us, drove away the monkeys, and supported us when one of us was going to fall.

We were half smashed, yet arrived safely to the ruins and landed near the cave of a holy sannyasi, called Lucky Brema, an astrologer, theurgist, thaumaturgist, etc., etc., another fakir just exhumed and resuscitated after a few months' sojourn in his grave, where he hibernated for lack of anything better to do. I suppose he prophesied all manner of evils to us for not believing in his idols, and so we departed. But the ruins must be five thousand years old, and they are pretty well historical. 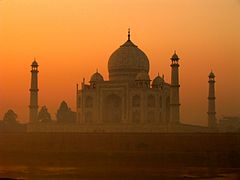 THE TAJ MAHAL·.
At Agra we saw Taj Mahal, that "poem in marble," as this tomb is called; and really it is the wonder of the age. The builder of it boasted that there was not one inch of either stone, wood or metal in this construction, which is truly gigantic-all pure marble and carved into an open fret-work like a piece of lace. It is enormous in size; sublime as an architectural conception grand and appalling. In Agra, this dirtiest of all towns, with its half-ruined huts of dried cow-dung, it looks like a magnificent pearl on a heap of manure.
HONORS BESTOWED BY MAHARAJAH.
We visited in Rajpootana, Bhurtpur and Jeypur, two independent States. The Maharajas sent us their carriages, runners, horsemen with banners, and elephants. I imagined myself the Empress of Delhi. We went to Deeg, near Bhurtpur-something like the garden of Semiramis,(9) with six hundred and sixty-three fountains and jets, and the marble palace, four halls, pavilions, temples, etc., the palace, covering an area of two square miles, and with the garden, four. It was built by Suraj Mull Sing, three hundred and fifty years ago. But the old palace is two hundred years old. It is the place where a Rani (queen), seeing the Mussulmans ready to enter the fortress, assembled ten thousand women and children, and all her treasures, and burned herself and the rest in the sight of the invading army.

JEYPUB, THE PARIS OF INDIA-THE BHUTS.
From there we went to Jeypur, the "Paris of India" it is called. It is indeed a Paris, as to the beauty and magnificent symmetry of its squares and streets, but it looks like a Paris of red sugar candy. Every house and building is of a dark pink color with white marble cornices and ornaments. All is built in the Eastern style of architecture. It was built by Jey Sing, the adept and astrologer; and his observatory, occupying an enormous palace with immense court-yards and towers, is full of machinery, the name and use of which is entirely forgotten.


People are afraid to approach the building. They say it is the abode of Bhuts, or spirits, and that they descend every night from Bhutisvara (a temple of Siva, called the ''Lord of the Bhuts" or "spirits" or demons, as the Christians translate, overlooks the town from the top of a mountain thirty-eight hundred feet high), and play at astronomers there.


A magnificent collection of over forty tigers is right on a square, a public thoroughfare in the middle of the town. Their roaring is heard miles off.

AMBAIR AND ARCHAIC RUINS.
We went on the Raja's elephants to Ambair, the ancient city and fortress taken by the Rajpoots from the Minas, 500 years, B.C. The first view of Ambair brings the traveller into a new world. Nothing can surpass its gloomy grandeur, solidity, the seeming impregnability of the Fort circumscribing the town for twelve miles round and extending over seven hills. It is deserted now for over twelve generations; centenarian trees grow in its streets and squares; its tanks and lees are full of alligators. But there is an indescribable charm about the beautiful, forsaken town, alone, like a forgotten sentry in the midst of wilderness, high above the picturesque valley below. Hills covered with thick brushwood, the abode of tigers, are crowned with ramparts, and towers and castles all around the ruined city.
The ruined heap of Kuntalgart is considered to be three thousand years old. Higher still is the shrine and temple of Bhutisvara (of "unknown age," as the English prudently say). Read Bishop Heber's enthusiastic narrative of Ambair or Amberi.

The palace of Dilaram Bagh is another miracle in marble, preserved because kept restored. Its innumerable halls, private apartments, terraces, towers, etc., are all built of marble. Some rooms have ceilings and walls inlaid with mosaic work, and lots of looking-glasses and vari-colored marbles. Some walls are completely carved lace-work-like again through and through; and the beauty of the design is unparalleled. Long passages, three and four hundred yards long, descend and ascend sloping without steps, and are marble also, though entirely dark. The bath halls, inlaid with colored marble, remind one of the best baths of Old Rome, but are vaster and higher. There are curious nooks and corners and secret passages and old armor and old furniture, which can set crazy an antiquarian.
﻿
THE RAJPOOTS.
Remember, Todd(10) assures us that the Rajpoots trace their lineage backward without one single break for over two thousand and eighty years; that they knew the use of fire-arms in the third century, if I mistake not.(11) It is a grand people, Doctor; and their history is one of the most sublime poems of humanity; nay, by its virtues and heroic deeds it is one of the few redeeming ones in this world of dirt. The Rajpoots(12) are the only Indian race whom the English have not yet disarmed: they dare not. When you see a Rajpoot nobleman, he reminds you of the Italian, or rather the Provencal medieval Barons or troubadours. With his long hair, whiskers and mustaches brushed upward, his little white or colored toga, long white garments, and his array of pistols, guns, bow and arrows, long pike, and two or three swords and daggers, and especially the shield of rhinoceros skin on which their forefather, the Sun, shines adorned with all his rays, he does look picturesque, though he does look at the same time as a perambulating store of arms of every epoch and age.

No foreigner is allowed to live in Jeypur. The few that are settled there live out of town but permission is obtained to pass whole days in examining the curiosities of the town, We have several "Fellows" of the Theosophical Society among Rajpoots, and they do take seriously to Theosophy. They make a religion of it. Your signature on the diplomas is now scattered all over Rajpootana.
And now I guess you have enough of my letter. I must have wearied you to death. Do write and address Bombay, 108 Girgam Back Road. I hope this letter will find you in good health. Give my cordial salutations to Bouton and ask him whether he would publish a small pamphlet or book-'' Voyage'' or'' Bird's Eye View of India,'' or something to this effect. I could publish curious facts about some religious sects here.
Missionaries do nothing here. In order to obtain converts they are obliged to offer premiums and salaries for the lifetime of one who would accept the "great truths of Christianity." They are nuisances and off color here. My love to Mrs. Thompson if you see her. Olcott's love to you.