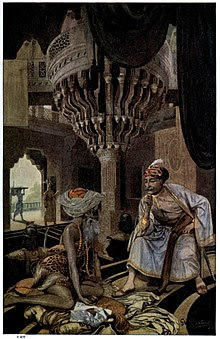 1-The "authorities" are not altogether clear, and the matter is by no means beyond controversy. One legend describes the Emperor of India, Vikramaditya, as having learned of the Infant Salivahana, born of a virgin, simultaneously with Jesus at Bethlehem, and as being slain by him when on an expedition to destroy the young child, then in his fifth year. Salivahana was immediately crowned at Oujein. This was at the time of the beginning of the present era; and Salivahana is said to have left the earth in the year 79. Major Wilford explains that this name signifies "borne upon a tree."


The account generally accepted relates that when Kali was about to destroy the world, Vishnu made an avatar or descent for its salvation. He became the son of Vasudeva and Devaki. The king, Kansa, having commanded to destroy all male infants born at that time, he was carried away and placed with a foster-mother in another country. Hence Devaki is revered as Mother of the God.-A. W.


2-The government of Magadha or Northern India had fallen into the possession of the Maurya monarchs, belonging to the Sudra caste. King Chandragupta was allied to seleukos, and his successor Piyadarsi was the prince known to us as Asoka. Having embraced Buddhism, this prince labored zealously to disseminate the doctrines, not only over India, but to other countries, clear to Asia Minor and Egvpt. The cave temples, however, were constructed by older sovereigns, but the Brahmans often seized the sanctuaries of other worships and made them their own.-A. W.


3- Fergusson agrees with this description. In his treatise on "Architecture" he remarks: "The building resembles to a very great extent an early Christian Church. In Its arrangements, consisting of a nave and side aisles terminating in an apse or aide-dome round which the aisle is carried; Its arrangements and dimensions are very similar to those of the choir of Norwich cathedral."


General Furlong, while accepting the theory of the later origin of the structure, considers the temples at Karli as at first Buddhistic, adding the significant fact that Buddhism Itself appropriated the shrines and symbology of earlier worships. In confirmation of this the Rev. Dr. Stevenson, writing for the "Journal of the Royal Asiatic Society," insists that the worship of Siva was "an aboriginal superstition," which Brahmanism had adopted, but imperfectly assimilated. The rock-temples appear to have belonged to this worship, but there is no account or tradition of their construction, and Mr. J. D. Baldwin ascribes them to an earlier population.-A. W


5- This description indicates that, not Devaki, the mother of Krishna, but Uma, Maya or Prakriti the Sakti or consort of Siva, was the divinity here honored. It may be that the Brahmans, appropriated an archaic sanctuary to their own religion, named the divinity anew, but it was to be Sakti plainly enough. It is stated by Mr. Keane that a similar figure, known as the Shee-lah-na-gig is found in the Tara cemetery, and other sacred places in. Ireland.


6- Akbar was a Moghul monarch who came to the throne of Mahommedan India, about three centuries ago. Disgusted with the cruelties and arbitrary requirements of the Koran, he made himself familiar with other beliefs, finally adopting a mystic theism. His long reign was peaceful and prosperous, and he is grateful1y remembered.


8- The Solar and Lunar races were Aryan alike. The Lunar peoples repudiated the Solar divinities or relegated them to a subordinate rank.


9- Probably the hanging gardens of the Median queen of Nebuchadnezzar.


11- This statement is confirmed by several ancient classic writers.


12- The term Rajpoot signifies man of royal descent. The other designations of this caste, are Kshathriya, Rajauya and Rajbausi, all denoting royal association. After the Aryan Invaders of India bad begun to devote themselves to husbandry and the arts of civilized life, the military class remained apart and became a distinct caste and people. Like the princes of Assyria they are altogether kings and kingly.