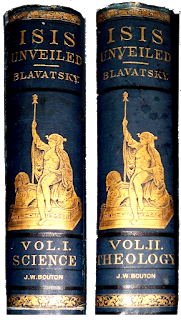 To mark the release of Blavatsky Unveiled: The Writings of H.P. Blavatsky in modern English. Volume I, by Moon Laramie  https://www.treadwells-london.com/product-page/blavatsky-unveiled-moon-laramie (a post on this work to follow) below is an edited summary of Isis Unveiled from a previous analysis of Blavatsky’s first magnum opus (see Isis Unveiled Summary on left sidebar).

Blavatsky’s Isis Unveiled was tremendously well-received at the time, an instant best-seller, a critical success, going through many reprintings and was the essential theosophical textbook for the first five years of the movement.  Upon moving to India, more explicit oriental esoteric information began to be presented in the pages of the Blavatsky-edited, The Theosophist and the success of A. P. Sinnett’s The Occult World and especially Esoteric Buddhism effectively superceded Isis as the essential theosophical textbook for the next five years; so much so that Blavatsky herself was critical of Isis  and felt the need to present a revised edition, which eventually became The Secret Doctrine, itself effectively superceding Esoteric Buddhism as the fundamental theosophical reference work.However, despite Blavatsky’s own perhaps overly severe critiques of her own work, posterity has been kind to Isis. Scholars such as Nicholas Goodrick-Clarke and Gary Lachman have praised the work and it has seemed to have aged well, standing the test of time and perhaps proving to be more accessible than the mind-boggling Secret Doctrine. Despite the complex writing style, the book makes for an excellent introduction and compendium of essential esoteric, theosophical and spriritual concepts.

The very dense, erudite writing style can be challenging, but I don’t really think the work has deep organizational and editing flaws, but rather the confusing nature of the work is merely due to some superficial hurdles that, if understood, one can see the inherent coherence of the work as a whole. Morever, it is interesting to note that The Secret Doctrine contains many verbatim passages from Isis, credited and uncredited, and there are many more striking passages that remain fundamental and enlightening examples of Theosophical concepts that have lost none of their relevancy.  As Michael Gomes has written: ”a thread of continuity emerges with startling clarity through the labyrinth of words, highlighting the basic concepts Blavatsky was trying to explain”.

Primo,  the work juxtaposes, compares and contrasts modern writings with a great variety of ancient writings; now the jumping back and forth from present to past ideas are sometimes a bit abrupt and unclear, but once this basic structure is understood, then the basic themes of each chapter becomes clearer.

Secundo, the chapter titles and descriptions are a little vague and do not convey the actual contents as clearly as they could. By digging a little deeper, one can see that all the chapters do have very specific and coherent themes and detailed arguments.

Tertio, the page headings, although meant to be helpful topic summaries, probably suffer from being a little too cryptic and are often phrased with an overly ironic and exotic tendency that are more distracting than useful in conveying the seriousness of the subject matter; my favorite example being ”Do flying guitars unconsciously cerebrate?” (vol. 1, p.233), a rather surrealistic question, but upon reading the page one encounters a very deep analysis of some important documentation of supernatural phenomena.

Isis Unveiled  Vol. I is a remarkable work in many ways. It can serve as a basic primer in esoteric philosophy and the occult sciences. It also introduces new theosophical concept s of spiritual evolution and it contains several interesting running sub-themes.

An important aspect is the skeptic outlook towards science – there is an impressive amount of hardcore scientific research and critique of modern empirical scientific method; therefore it offers considerable insight into the area of philosophy of science. Moreover, the polemic aspect is bold and forceful; this is clearly a project of intellectual reform aimed both at the materialist science and academic fields as well as the spiritualist corner.

The Basic ideas that govern both volumes can be summarized as follows:

1- Comparing, critiquing and contrasting ancient and modern science and religion (and rehabilitating the former);

2- Comparing ancient and modern western knowledge with eastern culture (and rehabilitating the latter);

3- Using the first two points (with wider comparative research) to posit the existence of a universal, perennial wisdom;

4- Using the first 3 points to introduce notions of esoteric philosophy (which includes a holistic, essentialist multi-modal ontological world view, a cyclical view of history, a pro-Atlantis anthropological theory, and a Darwin-informed concept of spiritual evolution);

5- Using these notions of esoteric philosophy to build a new synthesis of (a) ancient and modern science; (b) eastern and western knowledge; (c) science and religion.

6- Arguing for the idea of India as a pre-eminent cradle of civilization.

7- Critiquing and clarifying the problem of spiritual phenomena and magic using esoteric principles.

8- Positing the existence of adepts, who through their acquired spiritual knowledge, have been the caretakers of a primordial divine wisdom since the earliest existence of humanity.

It is important to understand the context of alternative spirituality that existed prior to the publication of Isis, notably from the 1850s to about 1900 there was a remarkable wave of spiritualistic phenomena, materializations, etc…and Isis is very much concerned with these questions and debates and so this can be considered an important work in the history of spiritualism and modern spiritual movements.

The scope of the research is impressively wide and eclectic and it can be said to be attempting to lay down the foundations of a new worldview and indeed, many of the themes have been adapted to contemporary spiritual and new age movements, so Isis can be considered a touchstone work for modern spirituality and also a seminal work in the history of alternative science. 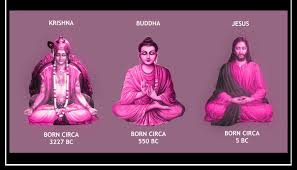 The second volume of Isis Unveiled, dealing with religion, although looser in structure, is nonetheless a sprawling, ambitious study in comparative religion. The first seven chapters mainly comprise a fairly detailed and original study of early Christianity through the first five centuries, relying on the studies of the time, mainly Supernatural Religion by Cassels, with the eighth chapter filling out the history of esoteric movements up to her time.

At the same time, the first eight chapters pursue other goals, mainly to critique perceived problems with the current Christian churches and pointing out the historical causes and to present a reform project by presenting an esoteric study of key Judeo-Christian theological concepts such as the Trinity and the Logos through perennialist comparative studies involving Hinduism, Buddhism, Greek Paganism, Zoroastrianism and Gnosticism, among others.

She has a notably pro-Gnostic stance, both Jewish and Christian, foreshadowing the remarkable resurgence of Gnosticism in the latter half of the twentieth spurred by the famous Qumran and Nag Hammadi discoveries. Indeed her writings are quite consonant with the contents of those texts, especially in her noting the importance of Jewish Gnosticism. She also presents groundbreaking research on Mandean Gnosticism with her use of the Ginza (Codex Nazareus). Morever, her portrayal of Jesus prefigures the alternative biographical studies of Jesus and the historical view of a simpler early Christianity that challenges the later assumptions of the Nicean council.

The final four chapters, are more focused and self-contained: chapter nine adds more study of theosophical concepts of spiritual evolution in ancient scriptures that prefigure the Secret Doctrine, chapter ten presents a specific critique of the dogma of the Devil, adopting a Miltonian/Masonic esoteric interpretation of the fall of Lucifer, chapter eleven gives a solid comparative overview of Hindusim, Christianity, and Buddhism while chapter twelve serves as a general conclusion for both volumes, emphasizing magical practices found in eastern religions.

With the remarkable subsequent rise of Hinduism and Buddhism, as well as Gnosticism, Sufism and the Kabbalah in the West and the continued decline and necessary reforms by the Christian churches, this work can be seen as remarkably prescient and influential (one is tempted to see this work as the founding charter for modern new age and alternative spirituality) and many of the ideas and theories are still relevant 140 years later.

On the writing of Isis by Geoffrey Farthing:

The semantics of Isis by David Reigle: https://www.theosophical.org/publications/quest-magazine/3616