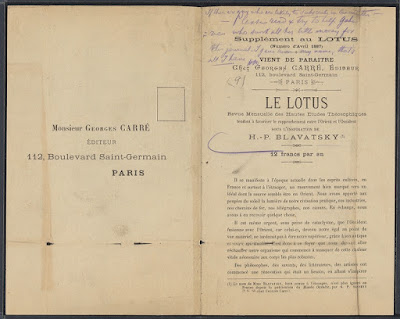 Here we have a fresh mystery: an unidentified and undated single page from the Harvard collection.The content is quite original and intriguing and could indicate that her correspondence with Skinner continued beyond the short period of the dated letters.

The Skinner collection also has several letters from scholars referenced in Skinner's writings such as John William Draper, Hargrave Jennings, Augustus Le Plongeon, John A. Parker, Gustavus Seyffarth, and Charles Piazzi Smyth.There are also letters from Bertram Keightley and Countess Wachtmeister sent on Blavatsky's behalf during her period of correspondence with Mr. Skinner when she was ill.

Here therefore we have : -(1) a date assignment, viz. 3447 B.C. – (2) the statement that the alphabet was devised to indicate the state of the heavens of that time and thirdly (3) the most ancient alphabet as it has been transmitted down to us.

(In addition)  to this let your attention be also directed to this strange fact :- The vowels are distinct in their very nature from consonants. Vowels are the true signs of sounds, and consonants only the frame on which the sounds can be given by help of the vowels. From this consonants have been compared to the human frame without the vital spark which the vowel signature represents. For this reason of distinctiveness it would be most natural to classify the two parts separate as vowels by themselves and consonants by themselves. Why therefore are they found scattered here and there through or among the consonants of the alphabet – irregularly. It is notorious that-with the ancients the 7 planets were indicated by the 7 vowels and when sung on a musical scale with our range of notes, as do, re, mi, fa, sol, la, si but only so but the order of planets representation was fixed from the lowest or most obscure to the higher or clearer sound, as from Saturn to Luna. Thus, in music : c d e f g a