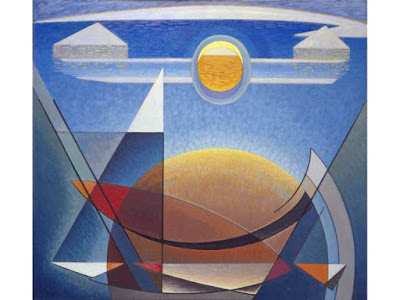 The Occult Roots of Modernism
Joséphin Péladan’s mystical art exhibitions, in Paris, set the stage for everything from Kandinsky’s abstractions to Eliot’s “The Waste Land.”
June 26, 2017 Issue - Alex Ross
Péladan had little direct impact on early modernism: instead, the dominant force was Theosophy, the half-visionary, half-spurious movement that Helena Blavatsky and others launched in New York in 1875. Blavatsky devoured Rosicrucian texts and related Christian esoterica, and combined their ideas with influences from the East. She notoriously claimed to be communicating with eternal Indian Masters. Such hocus-pocus did not prevent the likes of Kandinsky from appreciating the vigor of Theosophy’s assault on materialism in the name of higher truth. Kandinsky’s controlled explosions of color bear a striking resemblance to images that appear in “Thought-Forms,” a standard Theosophical text. His paintings can be viewed as opaque sacred emblems, conduits of spiritual revolution. Silver sees similar tendencies in the work of Marcel Duchamp, Kazimir Malevich, Hilma af Klint, and Piet Mondrian. “I got everything from the ‘Secret Doctrine’ (Blavatsky),” Mondrian wrote, in 1918.
https://www.newyorker.com/magazine/2017/06/26/the-occult-roots-of-modernism

Matthew Collings on meaning, abstraction and why judgementalism can be a problem.
May 2017
Matthew Collings: There is no single meaning. In historic modernism it’s a development in art (mostly painting) in the 1910s, considered to be something to do with spirituality – to be spiritual was a middle-class, pan-European vogue focused on charismatic figures like Blavatsky and Steiner. (The idea was that human spirit evolves over time, and that spiritualism is a concentrated effort to further that process.)
http://www.spiked-online.com/spiked-review/article/modern-art-is-not-rubbish/19760#.WS8axGeM3cs

Interview with Carolyn Christov-Bakargiev
3 May 2017, Neil Powell
Well that’s a very good question. It came about on a very small scale, which is that I was looking for quite a number of years, for the original washes (watercolour illustrations) that Annie Besant had asked a bunch of friends including John Varley who was the grandchild of the one who had illustrated Blake, and anyway I had been looking for these original washes for years because I figured that they were published in the thought forms [1] book in 1905 they had to exist as originals and finally two months after the opening of the Istanbul Biennial in September 2015… these were found in Varanasi in the Theosophical Society library [2] and so I started to think “well I should exhibit them immediately!”.
http://wsimag.com/art/25518-colour-me-bad

Canadian Theosophist-painter Lawren Harris had a big year:
Where the Universe Sings gives us a portrait of painter Lawren Harris
Chris Knight -January 24, 2017
A new film by Peter Raymont and Nancy Lang explores Harris’s life and influences, from his 1885 birth in Brantford, Ont., to his death 84 years later in Vancouver
http://news.nationalpost.com/arts/movies/where-the-universe-sings-gives-us-a-portrait-of-painter-lawren-harris

the theosophical references in the article below are not so great:
The Mystic
Jason McBride 2016
http://torontolife.com/culture/art/lawren-harris-mystic/