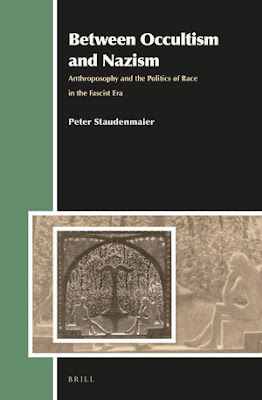 With works such as these, it is becoming clearer that the Theosophical Movement had a certain social impact during the period of the two world wars and historians are beginning to note the historical importance thereof.
There have been some lively exchanges between Staudenmaier and anthroposophists and a full-fledged work appeared a while ago:
Peter Staudenmaier Between Occultism and Nazism
Anthroposophy and the Politics of Race in the Fascist Era.
Leiden and Boston: Brill, 2014. vii + 412 pp.
His knowledge of theosophical historical scholarship seems quite thorough. His knowledge of Blavatsky seems cobbled together from secondary sources. Page eleven has an acceptable analysis of her concept of spiritual evolution but on page 12, there is an quick shift to Annie Besant’s writings. Some would argue that there are considerable differences between the two and that the period between 1895 and 1910 was a critical period when the shift occurred. Unfortunately, Staudenmaier does not give an account of this issue. It is also unfortunate that there is such little research on Franz Hartmann. (Presumably, these issues were not the focus of the book, as he has written elsewhere about all these points, such as Steiner's extensive reworking of Blavatsky's original concepts, so he presents all these points in a rather hyper-compressed first chapter). Overall, it seems a more tempered attitude toward Blavatsky than his earlier "Anthroposophy and Eco-Fascism".
https://brill.com/view/title/24927
Review by Stefan Arvidsson:
A critical remark regarding Staudenmaier’s focus on “race” would be that he refrains from providing a comprehensive portrait of Steiner’s esoteric ideas and worldview. Such a picture, even one constructed quickly with broad strokes, would give the reader an idea of the relative importance of the notion of race for Steiner’s thinking, and it would also give the reader a hint about what other issues the anthroposophical and the Nazi imaginations could attract or repel.
I might have missed scholarly discussions along Hansson’s lines; in that case, I look forward to taking part of them in the future.1 I also believe this to be an important path to follow because the study of esotericism often tends to isolate itself from the study of modern religion and culture in general; anthroposophy is of course the perfect bridge between the obscure world of occultism and the overarching intellectual and cultural history.
The contemporary persona of anthroposophy as an internationalist, humanistic and even “female” movement that experiments with different crops and “eurythmic” dances actually brings anthroposophy back closer to (the persona of) the Theosophical Society that Steiner and his allies disparaged and broke away from to craft a purely Western mysticism on German soil.
1 The editor kindly reminds me that Wouter Hanegraaff ’s New Age Religion: Esotericism in the
Mirror of Secular Thought (Leiden: Brill, 1996) emphasises the importance of Naturphilosophie
for the rise of modern esotericism, and furthermore informs me that this track is followed for
the case of Steiner in Helmut Zander, Anthroposophie in Deutschland: Theosophische Weltanschauung
und gesellschaftliche Praxis, 1884–1945, 2 vols. (Göttingen: Vandenhoeck & Ruprecht, 2007) and
in Egil Asprem, The Problem of Disenchantment: Scientific Naturalism and Esoteric Discourse, 1900–
1939 (Leiden: Brill, 2014).
correspondencesjournal.com/ojs/ojs/index.php/home/article/download/20/21
Review by Olav Hammer:
For anybody interested in the intersection between religion, race, and politics, this book is a goldmine of information. The author has painstakingly examined immense amounts of published and archival materials and shows how anthroposophical race theories intersected in many and complex ways with extreme right-wing ideologies.
http://booksandjournals.brillonline.com/content/journals/10.1163/15685276-12341412
Presumably, this article is a tacit response to the reception of the Kurlander book:
The Nazis as occult masters? It’s a good story but not history
Peter Staudenmaier – June 2017
The problem with this alluring image is not just that it is false. The myth of Nazi occultism is more than an amusing curiosity, a testament to the power of cinematic suggestion. It actively detracts from a historical understanding of the very themes it highlights. It yields a distorted view of Nazism and a distorted view of occultism. But it also offers an occasion for critical reflection, a chance to see how we might make better sense of the tangled history of occultism in the Nazi era. It might even help us to understand Nazi evil and the not-so-hidden forces behind it.
https://aeon.co/ideas/the-nazis-as-occult-masters-its-a-good-story-but-not-history
Another recent historical study on Nazism and the Occult:
Revisiting the "Nazi Occult": Histories, Realities, Legacies
Monica Black, Eric Kurlander
Boydell & Brewer, 2015 - Germany - 297 pages
http://pelicanist.blogspot.ca/2016/04/the-nazi-occult-facts-and-myths.html
Posted by Mark Casady at 13:38